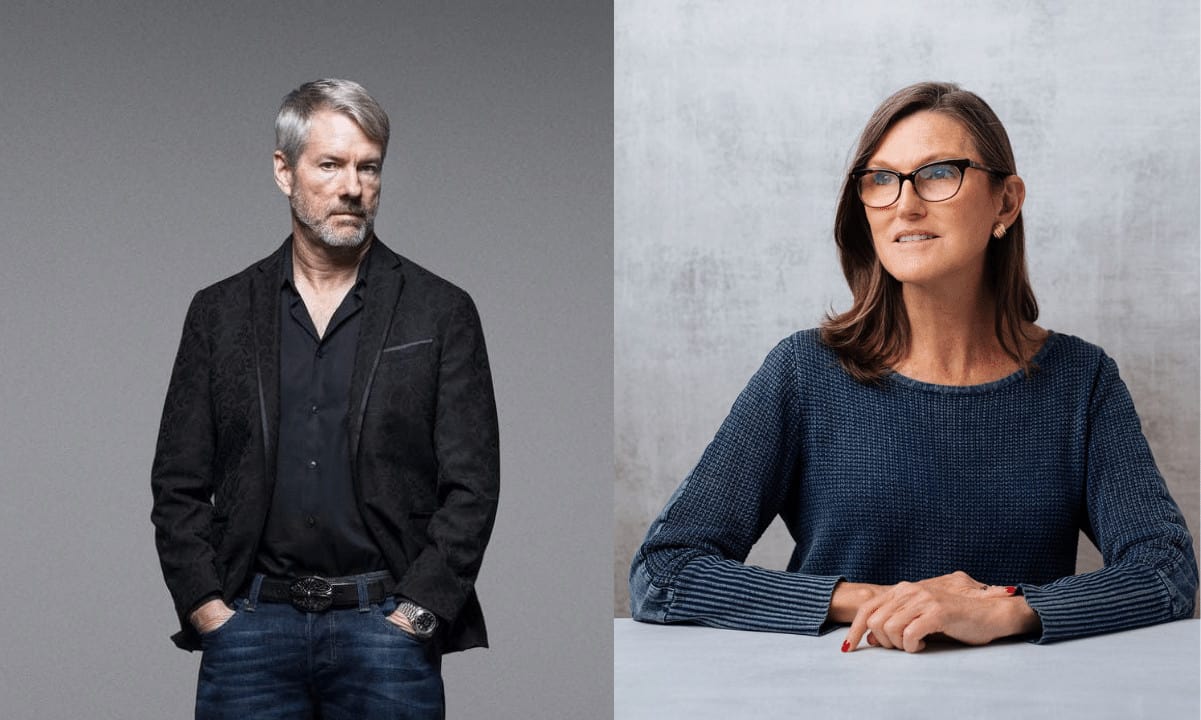 At the Miami 2022 Bitcoin conference, Michael Saylor (CEO of Microstrategy) and Cathie White (CEO of Arch Invest), held a panel.

Both tech investors had a positive vision of the biggest cryptocurrency and set ambitious price targets.

“People ask me if I’m still bullish on Bitcoin. Bitcoin is a topic that I’m more excited about than ever. The future is bright,” Saylor said.

Wood: Someone is Whispering in Politicians’ Ears

Both Wood and Saylor believe that regulatory winds are shifting in Bitcoin’s favor.

“I see the politics around Bitcoin radically. It has become a single issue that people are voting on – and it’s bipartisan,” Wood said.

Wood claims that Washington insiders are now changing their tune.

“Someone is whispering in their ear… if you want to lose out, and if you want the US to lose our… keep talking on that. And she has changed her tune,” she added.

On the other hand, Michael Saylor is bullish on President Joe Biden’s recent crypto announcement. Namely, Biden directed all federal agencies to research digital currency, a move which Saylor called a “green light” for Bitcoin.

“Bitcoin has been embraced. The administration has given a green light to Bitcoin” said Saylor. “Politicians are now competing who’s the most pro-bitcoin,” he added.

Saylor feels that the announcement provides a tremendous boost in BTC adoption. This could make it easy for institutional investors to get in on the action and invest in the asset.

Wood also mentioned the recent statements by Gary Gensler from Securities and Exchange Commission, in which he claimed that Bitcoin isn’t a security.

It is crucial as this reduces regulatory risk for Bitcoin. Wood thinks that it makes the cryptocurrency more distinct from other digital assets.

Bitcoin – Good for Inflation and Deflation

Wood and Saylor discussed political risks associated with Bitcoin. Now they will discuss economic risk. Tech investors don’t agree on the macroeconomic outlook for the world. Saylor is adamant that the monetary policy will remain inflationary and push prices higher.

On the other hand, Wood asserted that tech innovation will create huge deflationary pressures that will offset the Fed’s money printing.

“We had a spirited discussion about inflation… I would say that if inflation is an issue, clearly Bitcoin is s huge hedge,” Wood said.

Wood also believes that Bitcoin can be used as a hedge against inflation and to protect against counterparty risks. Namely, there is no third party that seizes Bitcoins from someone’s wallet.

Tech – Use Lightning or Die

Saylor noted that there are great tailwinds to Bitcoin Lightning Network adoption. It is an instant, low-cost payment system that can be used by anyone.

“Every tech entrepreneur, every exchange will have to include Lightning, if it wants to be viable,” complimenting Block’s Cash App and BitPay for driving adoption.

Sayor remarked that the “killer application” for Lightning could be bringing stablecoins to the network. Lightning Labs recently raised $70 Million to accomplish exactly that.

Woods believes there is a lot more potential in technology to grow by eliminating friction for customers.

Wood says that a simplified process for trading or transacting crypto will attract more people.

Her fund Arch Invest, which she mentioned was interested in a Bitcoin price target of $1,000,000.

“We don’t need much. All we need is that 2.5% of all assets is allocated in Bitcoin,” she explained.

Special Offer (Sponsored).
Get $100 off your Binance purchase (Exclusive). Use this linkSign up to get $100 off your first Binance Futures month and 10% off all fees (terms).

PrimeXBT Special Offer: Use this link to register & enter POTATO50 code to receive up to $7,000 on your deposits.